"Hate speech surrounds us. We can become positive messengers!" 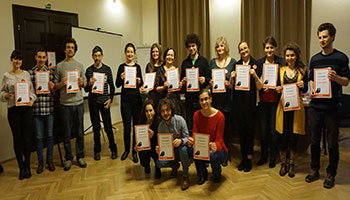 On 16th December 2017 in Tirgu Mures, Romania a workshop on the topic of online hate speech was held. It was attended by journalists, representatives of public institutions, non-governmental organizations and students. We thank you all for your participation.

The topics of discussion were:
1. Deontology or political correctness?
2. Free speech or hate speech?
3. Public interest or yhe interest of the public?

The participants agreed that in a dilemmatic world, confronted with finding truth or developing "alternative truths," in an online environment where hate speech is experiencing continued growth on the backdrop of the social and political movements of the world, Fake news and Hate speech has become too common to be neglected. It is a duty of civil society, state institutions, universities, the press, or any human being, out of respect for his neighbor, to combat these phenomena by his own or by specific means. During this meeting, concrete issues related to hate speech in our country were investigated and debated, respectively, counter-discourses techniques that can be successfully applied to combat hate, especially in the on-line environment.

The invited lecturers of this workshop were:
• Radu Răileanu, coordinator of the Annual Report on the Instigator of Hate Speech in Romania, edited by ActiveWatch.

• Iulia Vizi, former journalist, advisory board member of the project "Coalition of Positive Messengers to Counter Hate Speech Online " with over 12 years of experience in the press and civil society in Tirgu Mures.