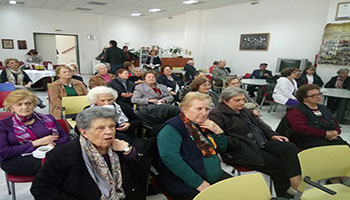 The Municipality of Aghii Anargiri Kamatero is launching a sensibilisation campaign against hate speech , on Monday 18th December 2017, on the occasion of the Immigrants' Day. The launching of the sensibilistion campaign includes the projection of a video that is going to be shown on social media.

The video concerns the statements made by: the Municipality's representatives, Safer Internet organisation, representatives of immigrants and other organisations . Moreover , the campaign includes special actions like: the implementation of  sequence of sensibilisation activities concerning social groups like children, parents, teachers, social scientists, and the elderly. The above mentioned actions have as a goal the dissemination of positive messages against online hate speech towards immigrants and refugees. The first sensibilisation activity took place on Tuesday 19th , at the 2nd Open Care  Center  for the elderly ,where the representative of the Safer Internet organisation , Doctor  George Kormas informed the elderly about the dangers that internet hides . A  fruitful discussion followed the presentation and the participants had the chance to exchange ideas .

The sensibilisation campaign against hate speech is part of a net of broader actions that concern the project :Coalition of Positive Messengers To Counter Online Hate Speech, co-funded by the European Commission – Directorate-General Justice.