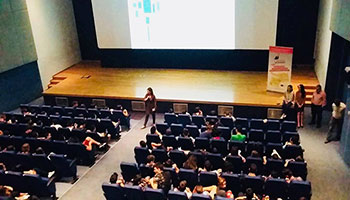 The Municipality of Agii Anargiri Kamatero continues successfully the awareness campaign on Hate speech , as part of the project called : “Coalition of Positive messengers to counter Hate speech”. More specifically :

During the 14 th Conference of the Hellenic Healthy Cities Network that took place on the 20 -21st of April in Didimoticho (Northnern Greece) Mrs Oikonomopoulou Aggeliki , Head of the Department of Social Policy, presented the issue under the title: “Coalition of Positive Messengers against hate speech : an innovative awareness and prevention campaign  in the Municipality of Agii Anargiri Kamatero”. More than 150 state employers, scientists and academics participated in the conference.

On Sunday 29th of April , during  a nomination event for those that had participated in the training program called “Access to the Digital world” the Department of Social Policy had the opportunity to present the main goals of Positive Messngers and its  campaign. More than 200 people over 50 years old  participated in the event more .

On Thursday 26th of April and on the 3rd the Positive Messengers group had the opportunity to host 2 High Schools in the municipal Cinema “Maria-Elena” .The main purpose of the two  events was to inform and motivate students against  on line Hate Speech and to watch the film called “Trust me” which is about a teenage girl that was deceived online by an older man and the consequences that she suffered . The number of students that participated reached 300.

The main goal of the awareness campaign is to inform citizens about Hate Speech , and especially online hate speech, the ways to confront it and at the same time to develop positive messenges that are based on the implementation of civil rights in every day life .