We are there and we believe in #the PowertoBeHumanAndRights 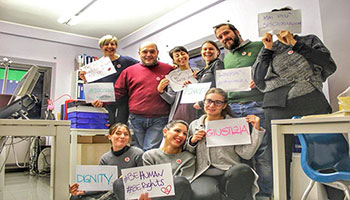 In the month in which we celebrate the International Human Rights Day, we are launching our public campaign “Positive Messengers – HOTLINE” against online hate speech.

In Italy, according to ISTAT (a survey of discrimination based on sex, sexual orientation, ethnic origin), one in three people has been discriminated against in at least one of the following areas: school (university), job search or at the work place.

Do you know where all these forms of discrimination are expressed? Mostly on the web, creating the phenomenon of online hatred.

It seems that human rights are often taken for granted; we tend to forget that they are necessary to live together with dignity.

There is still much to be done to ensure freedom, equality, dignity, fairness and non-discrimination.

We are there and believe in #thepowertobehumanandrights