“It's up to all of us to try - and those that say that individuals are not capable of changing anything are only looking for excuses.” Vaclav Havel 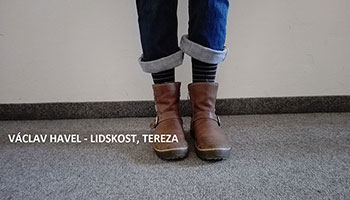 People in Need - One World in Schools launched their Positive Messengers hotline campaign on December 18 by paying tribute to the inspiring legacy of Vaclav Havel, human rights defender, last President of Czechoslovakia, and the first Czech President, six years after his death. Originally a playwright, he led the former Czechoslovakia’s dissident human rights movement Charter 77, was repeatedly jailed by the Communist government.

He was a key leader in the country’s anti-government ‘Velvet Revolution’ of November and December 1989, and became Czechoslovakia’s democratically elected president soon after. Havel left behind an outstanding moral and intellectual legacy. His work as advocate for human rights, democracy and freedom is an inspiration for all Europeans.

Positive Messengers coalition members as many other Czech people took photos of themselves in ankle-length trousers as the ones worn by Havel on December 29, 1989, during his presidential inauguration.