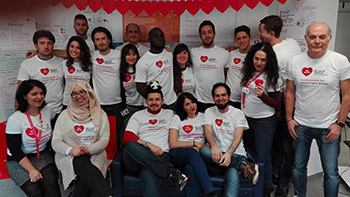 The aim of the training was to transmit the values and objectives of the movement and knowledge on human rights and Hate Speech online and offline in order to involve activists coming from different realities and to create networks at national level.

The conclusion of the training was in coincidence with the Action Day for Better Internet promoted by the CoE . In fact, the participants of the training have met 12 classes of the Secondary School "Salvatore di Giacomo" of Qualiano (Naples), putting into practice two non-formal educational dynamics taken from the Bookmarks of the Council of Europe and aimed at sensitizing young people to the issue of cyberbullying and combating hate speech.

During the training activities was presented the Positive Messengers project and was further increased the network of stakeholders involved in it. In fact, thanks to the participation to this event, in the Italian advisory board were involved a representative of “Light on” project and one from the No Hate Speech Movement Italy.