With POSITIVE MESSENGERS project events we aim at: 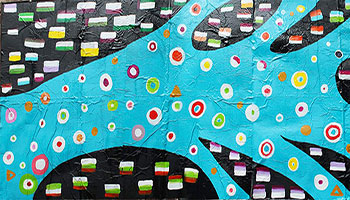 In this activity, through raising awareness actions, was involved a local school (30 classes) and numerous teachers and the main actors were 60 students from the school  that under the supervision of a local artist, have created a 12x2 meters painting that was affixed to a billboard in the centre of Perugia together with explanations on the project and the activity itself. Furthermore, pictures of the original painting were transformed into 90 informative posters 70x100 cm and affixed among Perugia and Assisi for 15 days. The billboards were aimed at both the dissemination of the creative tool and the dissemination of the project and its objectives and activities.

The realisation of this creative tool required the organization of several workshops with the pupils  during which they were invited to reflect on hate speech, were informed about the project  and at the end there was a discussion on the meaning and the message of the painting that they have created. For the exposition of the Collective Painting  was organized an inauguration that saw the participation of numerous local media representatives, migrants organizations, migrants representatives and the local society.