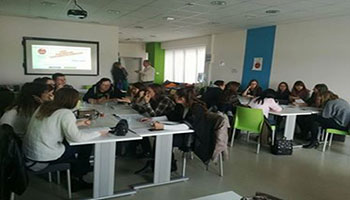 Training on hate speech organized by Centre for Peace, Nonviolence and Human Rights – Osijek was held on 6 and 7 November 2017. Target groups of the trainings were representatives of civil society organisations, media and students.

Participants were provided with thorough analysis of international and national legal framework on hate speech which was presented by expert on hate speech and Associate Professor at the Chair of Criminal law of the Faculty of Law in Zagreb, Ms Maja Munivrana Vajda. Participants were able to learn about recommendations, conventions and covenants which cover the area of hate speech directed towards vulnerable groups, as well as national laws which cover this topic, particularly the Croatian Criminal code. They were also provided with judgments of European Court of Human Rights in Strasbourg and Croatian courts regarding hate speech cases.

Topic of second part of the training was media literacy. It was held by Ms Tena Dundovic, LLM. Statistics on hate crimes were shown and short overview of the current situation on hate speech in Croatia was presented. Participants were acquainted with possibilities on how to report inappropriate content, especially with the tools available online. Afterwards, internal rules of Facebook and YouTube and how to report hate speech content on these sites was shown to them. Lastly, participants were told about the Code of conduct on countering illegal speech online signed between European Commission and four major IT companies, Facebook, Twitter, YouTube and Microsoft.

In part of the non-formal and informal learning of the training, on the first day participants were searching through Terms and conditions of various websites regarding hate speech, filled in a questionnaire and discussed about their results. On the second day participants played mini-trial concerning real case about the free speech which came before the European Court of Human Rights. Three groups played a role of different actors – judges of the Court, national government and a journalist who was punished by national court for producing a programme containing racist views.