Dynamic workshop – How to Deal with Prejudice 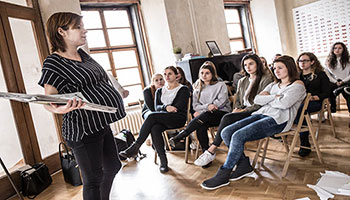 In the context of the Coalition of Positive Messengers to Counter Online Hate Speech project, One World in Schools held a dynamic workshop titled How to Deal with Prejudice. The workshop took place on the 14th of November in the Scouting Institute's building in Prague city centre.

Thanks to activities that are included in the One World in Schools methodology the participants had the chance to realize that we all are prejudiced to some degree and that we all need to identify and work with our prejudices. The activity titled What Do You Think about Me involved the experienced tutor Vlasta Urbanová challenging the participants to guess if she preferred the mountains/the sea, beer/wine/liquor, whether she had a dog, a driver's licence, or if she's always on time/strict/a tidy person and so on. This was followed by a discussion about the deciding criteria of a response and the general pattern that leads to becoming prejudiced.

During the activity titled Taking a Train around Europe the participants had to choose three out of eighteen travellers with whom they would be willing to spend several days on a train, and three travellers they would definitely not want to travel with (An obese Swiss broker, A Roma man travelling to Slovakia, An Irish football fan from Belfast apparently on his way to a match, A French farmer travelling with a basket of well-aged aromatic cheese). Subsequently they had to justify their criteria for choosing the specific people, realizing the hidden stereotypes influencing their decisions and the risks of generalizing.

We were also able use our audio-visual methodology. Following the film called On a Bike towards Freedom about a group of people from Bristol who collect old and unwanted bicycles and repair them with the help of refugee volunteers, providing them with a sense of importance and self-realization, we were able to open the topic of migration, Islamophobia, civic activism, and the refugee crisis, which proved to be a very controversial matter that needs to be discussed.

Later we held a creative workshop with Leona Masare who works as an innovative designer. The participants chose one of many news articles dealing with the topic of racism, xenophobia, and Islamophobia. The articles included a hateful online discussion which served as a basis for a creative reaction from the participants, who were able to come up with many humorous and trolling responses. This led to the creation of claims that were subsequently transformed into creative statements.

According to the evaluation, the most popular activity was the Live Library. Instead of books, the participants would “borrow” a person with an interesting life story, with whom they would probably never have a conversation in real life, being able to ask any question they were interested in. The participants were able to chat with a blind Roma man, with a homeless man, a transgender man and a woman, and with a Palestinian who escaped to the Czech Republic, which proved to be the most captivating story of all.